Hello and welcome to germanguitarguy.com!

This site is for all levels of guitar players who want to practice more effectively or want to learn about new concepts. I also share some knowledge about my favorite gear. Because many people struggle with finding the right sound, I will also show you how to set up your stuff – like line6 helix, Fractal Audio AxeFx and so on. 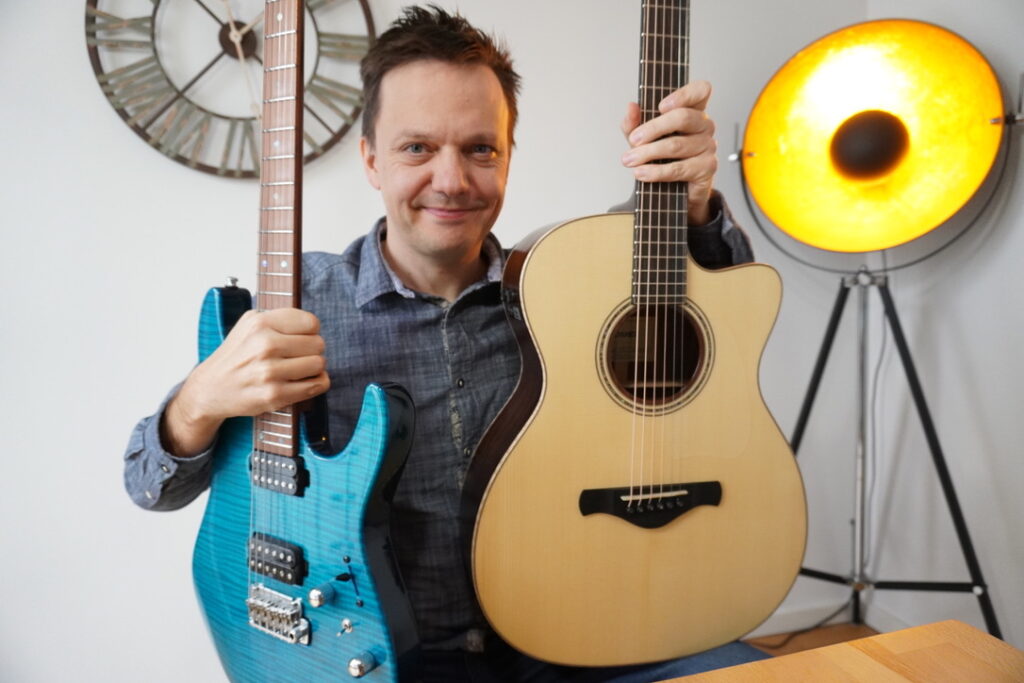 I hope you have fun with the site – if you have any suggestions, just let me know and use the contact form.

And if you want to keep in touch, just leave your email and subscribe to the german guitar guy newsletter – you can cancel any time. Every subscriber will get my “4 great warmups for guitar” video!

Born on the 25th of March in 1977, I started playing the guitar at the age of 8 and really sucked at it. I stopped after trying for 4-5 Month because I had no fun at all and my teacher forced me to play stupid folk songs I really hated.

Then, for 5 Years, I played the organ – with similar succes 🙂

At the age of 12, I really got into rock and metal music, especially because of a recording of a concert with (don‘t laugh) Ozzy Osbourne, Scorpions, Iron Maiden, Michael Schenker Group, Def Leppard, Saxxon and some other Bands I cannot remember. I watched this concert on videotape over and over again, and on my 13th birthday, I got my first electric guitar. After some month of struggeling, I started practicing 3-5 hours a day and soaked up everything guitar-related I could get my hands on. My first big advances came through Vinnie Moores instructional video „Speed and accuracy“ and Paul Gilberts „Intense Rock“. Yes, those where on VHS video tape!

At the Age of 16 I had my first (real) guitar teacher, who, after 3 month, told my that he couldn‘t show me anymore on electric guitar (he studied classical guitar) and that I should teach electric guitar at the music school. After serious talking with my parents and the president of the music school, I started teaching there some weeks later.

Around the same time I started writing my own music and had several regional bands with original stuff and covers. We covered the more heavy side of rock and some progressive stuff, like Queensryche and Dream Theater.

17 Years old, I found a very good guitar teacher who helped me so much in every aspect I cannot thank him enough. He introduced me to the music of Scott Henderson and many more incredible guitar players, and showed me tons of really well thought-out concepts I still use today.

From 1999 to 2000 I attended the Los Angeles Music Academy in L.A. with incredible Teachers like Frank Gambale, Jeff Richmann, Brett Garsed and many more. But it was more the enviroment of great music all over the place that transformed my playing to the next level. I thought about staying there, but decided to go back to germany and really kick it of there – and so I did!

I have released 6 instructional books in German language, played the guitar on several high end recordings and gigs and my private teaching spots in frankfurt are booked out.

In 2006, I released my first Solo Record „Thieves in the night“.

What I realized when teaching guitarists that already had lessons with someone else or where self-teached, there outstanding weakness was: BASICS! Fundamentals like right posture, using the right amount of force on the fretboard, positioning your fingers right, knowing the names of the notes on the fretboard (!!!) and most of all – timing!

I „restaurated“ their basic skills, and everyone of them played better than ever before!

You probably wonder why, with that many online guitar-learning-sites, I want to make another one… well, THAT is the Reason. You can get almost everything, from folk picking with country superstars to sweeping with Frank Gambale himself – but there is no online course that I know of that teaches you the most important thing:

Most of the Videos you get on the internet are made by really good musicians – the play great, sound great and are probably great guys. But about 90% of them require you to have the basics already figured out, and maybe the do not know how to teach them properly. Thats where I come in – I studied that stuff since I am 18 years old, always optimizing my methods and trying them out on my private students (sorry :-). Now, after 20 years of teaching, I think I got it right 🙂

Skills you can use in any style, on acoustic, classical or electric guitar that will supercharge your playing and let you play things you ALREADY KNOW much better and with less effort!

I also found some pretty effective ways to get you startet very quickly if you are a total beginner. The courses for this are in the works right now, and you will see when they are available.

And with my highly optimized training methods you can achive a lot by only practicing these conceps for 10 minutes 5 times a weak!